Beekeeping at the end of an Irish road

Blessed with a large population of relatives and friends living in Ireland, we spend a couple of weeks every summer visiting that gorgeous green island. This year we tracked down a couple of Irish beekeepers and learned how they do things. This column and the next are the result.

At the top of a hill overlooking Kilnaboy, Ireland (population 689), sits a large stone cottage. Pots and flowerbeds, hedges and wildflowers adorn the property. A semi-circle of rough stone steps leads up to a meadow where thousands of nearly black honeybees come and go. Beekeeper Robin Sheen, born in Bristol, England, says he was drawn to the property nearly 40 years ago because it was “the end of the road.” Truer words were never spoken. Patrick and I were sure we were lost a few times as the road wound ever farther up into a forest of evergreens, changing from a typically narrow Irish country road to a barely defined set of tire tracks, in one spot actually crossing a small stream.Mr. Sheen, who worked as a carpenter through Ireland’s boom times, came into beekeeping by accident. Apparently we accidental beekeepers are everywhere. “It happened in wintertime,” he said. “I was cutting trees for firewood and a guy phoned me up and said, ‘There’s a colony of bees in a tree I’ve just felled. Do you want them?’ This is December or January. Those were my first bees.”

That first rescued hive has now become 100 hives, many of them established after Ireland’s economic downturn in 2008. “For a long time,” he said, “it was more of a hobby, an interest, then slowly it morphed into being the only way to earn a living, because everything else had dried up. So I had to get more serious about it.”

Mr. Sheen said his “are mostly black bees, Irish bees, but they’re mixed a bit with other varieties.” His hives are scattered across farms in the nearby lunar landscape known as the Burren.

The Burren National Park website explains “the word ‘burren’ comes from the Irish word boíreann meaning a rocky place.” That’s a bit of understatement. At 135 square miles in size, it’s easy to find a spot where the view in every direction is virtually nothing but limestone. The burren is a “karst” landscape, formed as rain slowly dissolves the ubiquitous limestone stretching in every direction, and characterized by underground drainage systems studded with caves and sinkholes.

In 1651 a British Army officer serving under Oliver Cromwell remarked, “Of this barony it is said that it is a country where there is not water enough to drown a man, wood enough to hang one, nor earth enough to bury them. This last is so scarce that the inhabitants steal it from one another and yet their cattle are very fat. The grass grows in tufts of earth of 2 or 3 foot square which lies between the limestone rocks and is very sweet and nourishing.”

That contrast between the Burren’s barren appearance and its capacity to support life continues today. The Burren is internationally famed for the diversity of its flowering plants, and honey produced by bees foraging in the Burren contains nectar and pollen from alpine plants sharing space with others seen normally in Mediterranean climates. Woodland plants grow out in the open, away from any forest, and many species of flowering plants common here are extremely rare elsewhere in the world.

The result of this diverse hodgepodge of plant life is a jar of honey containing a blend of nectar varieties not found together anyplace else. It is sublime. “The honey is definitely different,” says the beekeeper. “People who buy it say so.”

Honeybees are native to Ireland and are known to have lived there for at least 10,000 years. Whether or not true “native” Irish bees still exist is a point of argument among beekeepers. Most of the native dark Irish bee population was wiped out around 1915 by Isle of Wight disease, a paralysis caused by mite infestation. Beekeepers brought in other dark bees with similar characteristics from Northern Europe to replace the native population.

Whether these are “true” Irish bees or not matters less than the traits that make them perfect for the Irish climate. Irish bees are chubbier and have longer abdominal hairs than their more common cousins, two characteristics that help them stay warm during long periods of cool weather. They live longer than the six weeks allotted most of our honeybees, and are able to go out and forage in the drizzly weather that can last for weeks in the west of Ireland, whereas our bees are housebound in wet weather. Irish queen bees will mate close to home, ours will travel at least 2 miles. This can lead to inbreeding in Irish colonies, but enables queens to mate and begin producing the pitter patter of little bee feet even if the weather doesn’t allow a long mating flight.

While many beekeepers in Ireland keep the traditional black bee, others rely on the same kinds of bees popular elsewhere—Italian, Carnolian, Russian and Buckfast. Irish beekeepers, like beekeepers everyplace else, are stubbornly opinionated. Fans of the native Irish bees fear that cross-breeding with other strains will weaken the stock and leave it less suitable for life in wet and windy Ireland. Others feel there’s more benefit to be had by using other strains.

Before we headed back from the end of the road, I asked Mr. Sheen when the traditional honey harvesting time is in Ireland. “When’s the harvest?” He laughed. “Usually it’s supposed to be about August. Supposed to be. But this year there isn’t one. They just haven’t managed to make any this year, not in the whole of Ireland as well, not just here. All the beekeepers in the country are complaining they have no honey. It’s because it’s been wet and cold.”

Next time I’ll tell you about Michael Curran, a beekeeper taking a different approach to managing bees in a cool, wet climate. 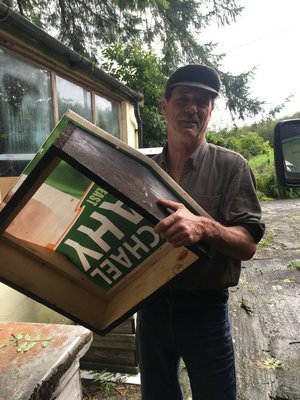 Beekeeping In Ireland By Lisa Daffy