The Burren Food Trail has been named the Irish winner of this year’s “European Destination of Excellence – Tourism and Local Gastronomy” (EDEN) award for developing a tourism offering based on their local gastronomy that balances sustaining the local environment with the promotion of viable tourism. This prestigious EU-wide competition is designed to encourage and promote a more sustainable form of tourism development and The Burren Food Trail was one of four destinations shortlisted earlier this month. The three runner-up destinations are – Cong Food Village, Mayo, West Waterford and The Wild Atlantic Way So Sligo Food Trail.

The theme of the 2015 competition was ‘Tourism and Local Gastronomy’ and the winning destination was chosen following on-site assessments by a panel of expert adjudicators. Following this year’s theme the panel of adjudicators were looking for a destination that could provide examples of good practice, opportunities to improve the visitor food experience, a platform for the development and promotion of food tourism, an understanding of the challenges faced in the development of food tourism and a forum for networks to share knowledge.

“We are delighted to announce that the Burren Food Trail as the ultimate victors of this year’s EDEN competition. The standard of finalists this year was exceptionally high. During their onsite assessment The Burren Food Trail clearly demonstrated that their local gastronomy has taken a central role in their tourism offering while concurrently sustaining their local environment.

“This year’s competition focused on small, emerging, non-traditional destinations located off the beaten track that offered an authentic food experience. Only in its third year the Burren Food Trail is still relatively new and we were impressed with the importance they placed on making The Burren region synonymous with great food and great food experiences for visitors and the local community.

“The connection between growers, producers, retailers and chefs working together to promote their destination as a whole was very much evident, the importance of the environs and their environmental management policy and the code of practice for their destination was also very much a high point.”

The Burren Food Trail will now be awarded the European title of “Destination of Excellence 2015 – Tourism and Local Gastronomy” and will receive free marketing supports from Fáilte Ireland including a professional photo shoot for the destination to be used for promotional purposes, a grant of €5,000 for business development support initiatives. A formal EDEN award ceremony will take place in The Burren in July and the winning entry will also represent Ireland at a ceremony/exhibition in Brussels later this year.

“These groups really appreciate the powerful association between taste and place, that sees Visitors drawn back to their regions not just by memories of people and landscapes but also by the food and drink that added to the pleasure of their stay.”

About Fáilte Ireland
Fáilte Ireland, the national tourism development authority, was established in 2003 to guide and promote tourism as a leading indigenous component of the Irish economy. The tourism and hospitality industry employs an estimated 200,000 people and generates over €3.5billion in overseas revenue a year. Fáilte Ireland has implemented and managed EDEN in Ireland since the competition’s inception in 2007, and has successfully run this competition since then.

About the EDEN Competition
EDEN is an EU-wide competition with two main aims. Firstly, it highlights the value, diversity and shared characteristics of European lesser known tourist destinations, and secondly, promotes destinations where the economic growth objective is pursued in such a way as to ensure the social, cultural and environmental sustainability of tourism.

The aim of the EDEN project is to draw attention to the value, diversity and shared characteristics of European tourist destinations and to promote destinations where economic growth is pursued in such a way as to ensure the social, cultural and environmental sustainability of tourism. 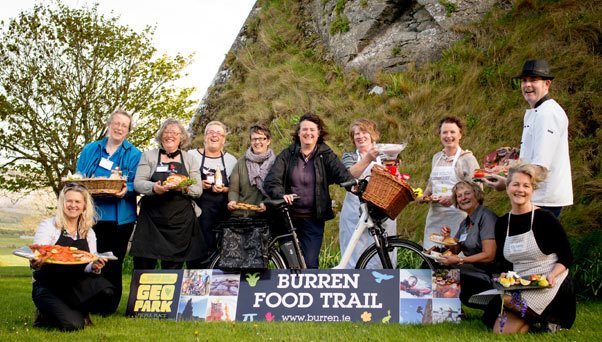